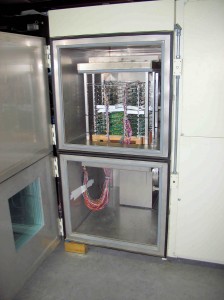 END_OF_DOCUMENT_TOKEN_TO_BE_REPLACED

This article discusses the reliability challenges of switching over to lead-free solder and the test methods used to demonstrate reliability, written by Gary Delserro and published in Evaluation Engineering Magazine.  Click on the link to download the article in PDF, Lead Free Solder Reliability Issues & Test Methods.

Environmentally friendly is a term rapidly invading the electronics industry.

The electronic industry will be facing great challenges over the next few years as the solder used in electronic products is migrating toward lead-free.  This is being driven by mandates in Europe such as Waste Electrical and Electronic Equipment (WEEE) and Restrictions of Hazardous Substances (RoHS) and similar ones in Japan.  There also is a great deal of pressure in the US to do the same.