Examples of vibration test videos can be found on our YouTube page.

Sinusoidal or Sine Vibration has the shape of a sine wave as seen in Figure 1.  The parameters used to define sinusoidal vibration testing are amplitude (usually acceleration or displacement), frequency, sweep rate and number of sweeps. 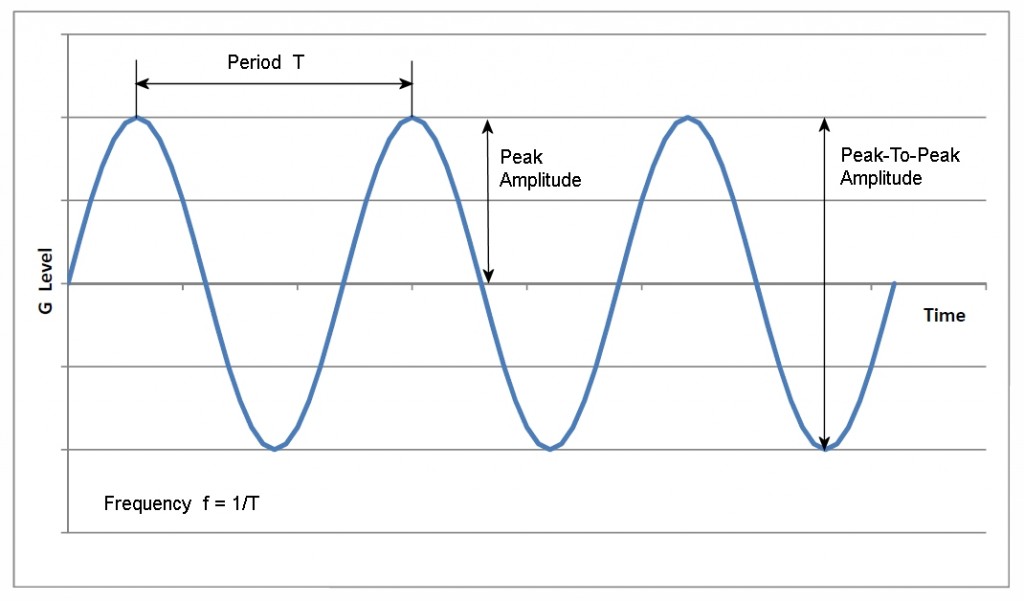 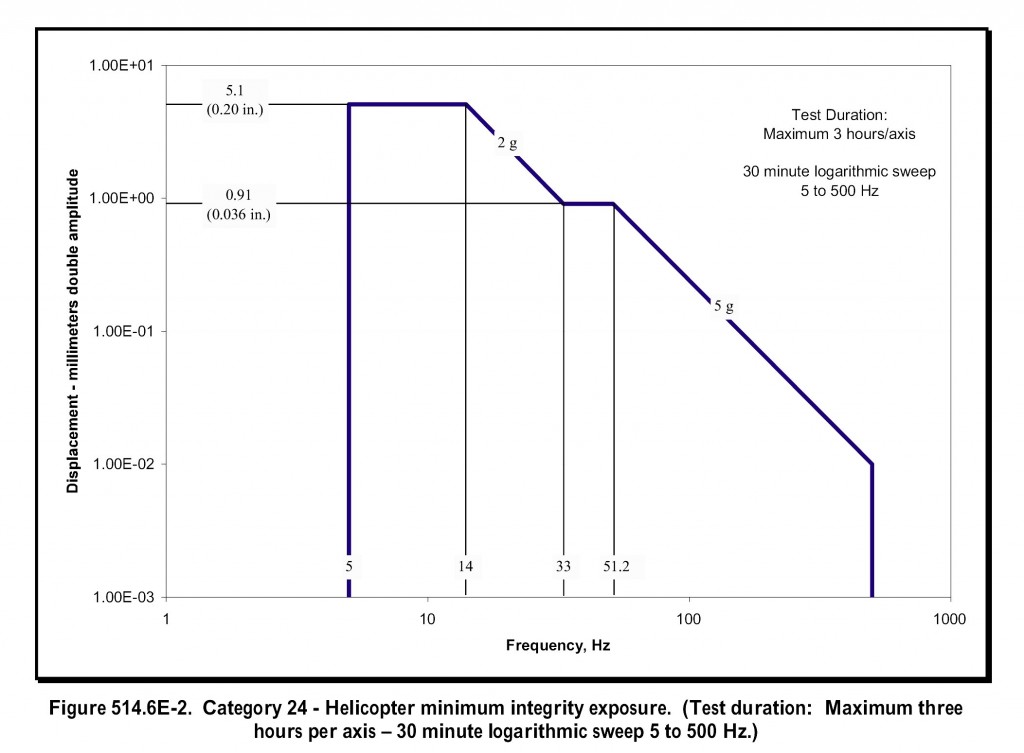 Sine vibration is not usually found in the real world unless your product is attached to equipment such as a motor or reciprocating compressor running at a fixed frequency.  Why is it done?  It is good to find resonances (amplitude magnification in the device under test), it is a simple motion and it also produces a constant acceleration vs. frequency.  Also, it is probably carried over from old test methods prior to digital computer controllers.  However sine vibration does not correlate to a field life unless the product is exposed only to fixed frequencies over its life.

Some parameters and definitions of a sine vibration test are:

Amplitude:  The amplitude for a sine vibration test is usually specified as displacement or acceleration.  In DES’s experience, velocity is rarely used in a specification.  As seen in Figure 1, amplitude can be expressed as peak or peak-to-peak.  When displacement is used to define amplitude, it is defined in either peak units of inSA (mmSA) or peak-to-peak units of inDA (mmDA).  SA stands for Single Amplitude (peak) and DA stands for Double Amplitude (peak-to-peak).  When acceleration is used to define amplitude, its units are usually G’s or millimeter per second squared (mm/sec^2) or meter per second squared (m/sec^2).

Frequency:  Frequency is defined as cycles per second.  Its’ units are Hertz (Hz).  Frequency is equal to the reciprocal of the period.

Octave:  The interval between one frequency and another differing by 2:1.

Period:  The time it takes to complete 1 cycle.  Its’ units are seconds.  Period is not typically used in the definition of a sine test.  It is listed here because of its relation to frequency.  Period is the reciprocal of the frequency.

Resonance:  A frequency at which an amplitude magnification occurs in the device under test when compared to the vibration table amplitude.  Usually a resonance is defined as a 2:1 or greater magnification.

Sweep Rate:  The rate at which the frequency range is traversed.  The units for sweep rate are usually Octave/minute or Hz/minute.  Octave per minute is a logarithmic sweep rate while Hz/minute is a linear sweep rate.

A typical random vibration test PSD is shown in Figure 3.  The PSD is defined over a range of frequencies.  The square root of the area under the PSD curves yields the Grms.  Specifying Grms only is not sufficient because a wide variety of spectra can result in the same Grms. 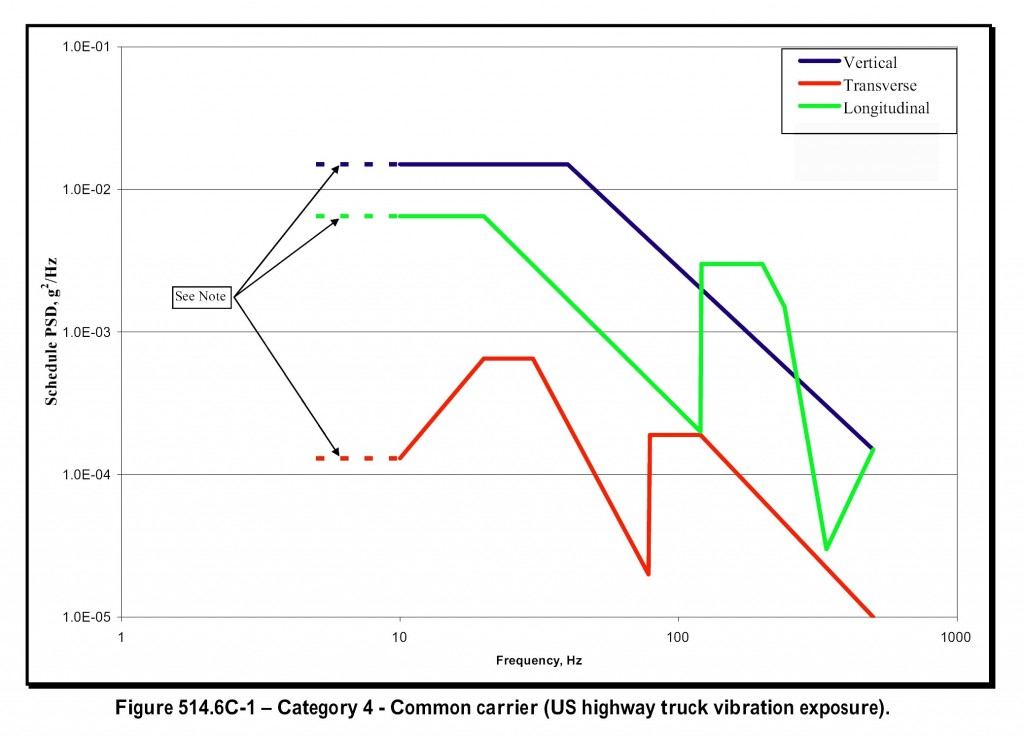 Some parameters and definitions of a random vibration test are:

Averages:  Since random vibration constantly changes over time (that is why it is called random), the controller takes samples or snap shots of the vibration data over time.  Successive samples are averaged.  The averaging occurs in each band of resolution.

Statistical Degrees Of Freedom (SDOF):  The number of independent values (measurements) used to obtain a PSD estimate at a particular frequency.  A higher SDOF means that more measurements are taken.

Grms:  Grms is used to define the overall energy or acceleration level of random vibration.  Grms (root-mean-square) is calculated by taking the square root of the area under the PSD curve.

Kurtosis:  Fourth moment of the Probability Density Function (PDF).  It measures the high G content of the signal.  The kurtosis of a Gaussian PDF is 3.

Number of Lines:  The frequency range of the test divided by the band resolution equals the Number of Lines.  The vibration controller or spectrum analyzer will perform its calculations for each narrow band.

PDF:  A statistical Probability Density Function.  A histogram showing the probability of occurrence and the distribution of data.

Sigma (σ) & Sigma Clipping:  Sigma is the standard deviation of a statistical PDF.  A Gaussian PDF distribution is assumed for random vibration which takes the shape of a bell shaped curve.  Since the amplitude or intensity of the random vibration will change over time, the time spent at different amplitude excursions is measured using a PDF.  Figure 4 shows a Gaussian PDF.  The vertical axis would be 1/G, the horizontal axis would be sigma and µ is the mean which is equal to zero for a shaker control.  For a Gaussian distribution, 68.2% of the peak G excursions occur between ± 1 sigma, 95.4% between ± 2 sigma, 99.7% between ± 3 sigma. 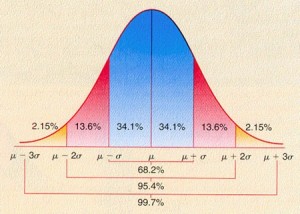 Vibration controllers allow you to clip peak amplitude excursions using Sigma Clipping.  Many specifications allow the clipping to be set at ± 3 sigma.

Frequency, G, octave, period and resonance are the same as defined under sinusoidal testing.

For more information on Vibration Shock Testing or other testing services contact DES or call 610.253.6637.