This is a case study of a reliability test performed by Delserro Engineering Solutions, Inc. 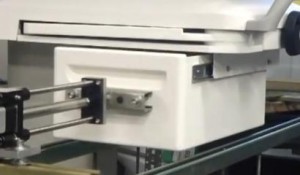 (DES) on a drawer used in a medical product. A sample of the test can be seen in our video library. DES was contacted by a leading medical equipment manufacturer to perform life cycle testing on a new product. One of the major components to be reliability tested was a drawer. This drawer had to be open and closed many thousand times during its lifetime.

Although opening and closing a drawer seems like a simple push pull motion, the cyclic motion was much more complex in this case. The drawer can be opened in opposite directions from either side of the cart. It has detents in the center of its slides that hold the drawer closed. DES had to create a complex automated cyclic motion that started with the drawer held in its center detents. The drawer had to be pulled opened until it hit the end stops in the slides. Then it had to be pushed past the center detents overcoming their latch force. Finally the drawer had to return to its closed position and latch in its detents. All of this had to be performed with maximum design weight inside of the drawer. In addition to this motion, the velocity and accelerations had to be controlled.

This complex cycling motion was performed using special actuators. The actuator travel, velocity and acceleration were programmed into a controller. The number of cycles for each complex motion was automatically counted until failure or a maximum design goal was achieved. During the test, the force to open and close the drawer was measured at various intervals. One of the challenges faced in this project was how to hit the end stops consistently without applying too much force to the drawer. Custom fixtures were designed and made by DES to control the force when the drawer hit the end stops and also to attach the drawer to the actuator.

Multiple samples were tested to ensure the manufacturers reliability and confidence level goals were achieved. Finally, the test results were analyzed with reliability computer software to determine the product’s field life or Mean Time To Failure (MTTF). A final comprehensive test report was delivered to the manufacturer. This customer chose DES because we were able to help them through every phase of their reliability program!