Classical shock testing consists of the following shock impulses: half sine, haversine, sawtooth, and trapezoid.  Pyroshock and ballistic shock tests are specialized and are not considered classical shocks. Classical shocks can be performed on Electro Dynamic (ED) Shakers, Free Fall Drop Tower or Pneumatic Shock Machines. The parameters required to define a shock test are peak acceleration expressed in G’s or m/sec^2, shape of the impulse, and duration in milliseconds.  A classical shock impulse is created when the shock table changes direction abruptly.  This abrupt change in direction causes a rapid velocity change which creates the shock or acceleration impulse. 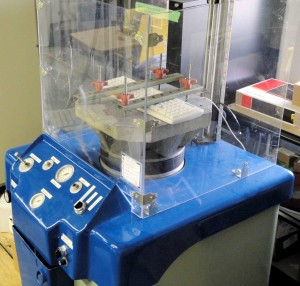 Classical shocks are applied along one direction and one axis at a time.  Most specifications require the product to be shocked in both the positive and negative directions along each axis.  If shock tests are performed on an ED shaker, the shaker can reverse polarity and perform the shock along both directions of each axis without rotating the fixture and specimen.  When performing shock testing on a shock machine, the machine can only apply shock in one axis and one direction.  The fixture and specimen must be rotated to apply shocks along different directions and axes.

Performing shock tests on a shock machine is much different than using an ED shaker.  To create an impulse on a shock machine, the shock table is raised upward to a predetermined height.  The table is released then falls or accelerates downward impacting a shock programmer.  The table bounces off the shock programmer changing its direction and velocity very rapidly.  Finally, the table is stopped before a second impact occurs.  The shock programmer is typically rubber or felt material, lead pellets or specialized gas cylinders.  The magnitude and duration (period) of the velocity change is what determines the peak G level and duration of the shock impulse. The type of shock impulse is a result of the type of shock programmer that is used.The drop height and programmer thickness can be initially estimated with calculations, however the final test setup is done by experimenting with the machine.

When performing shocks on an ED shaker, the controller software determines how to move the shaker table and create the impulse.  The user only has to enter parameters in the software such as the shock type, G Level and duration. No shock programmers are used.  The table is abruptly moved by the ED shaker and controller.

Below are some descriptions and samples of shocks performed by DES.  DES can perform classical shocks to thousands of G’s with durations from 0.2 to 70 milliseconds.  An important note in shock testing is that a greater velocity change (or harder impact) is required as the duration increases for a given G level.  Thus, not all G level and duration combinations can be performed.

A Half Sine Shock impulse has the shape of a half sine wave.  Figure 2 shows a typical half sine shock performed by DES.  The shock in Figure 2 is approximately 150 G peak acceleration with a duration of 11 milliseconds.  The shock programmers for half sine shocks are usually rubber or felt.

Figure 2. Half Sine Shock by DES 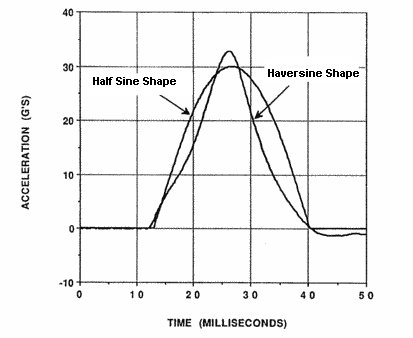 Figure 3. Haversine vs. Half Sine Shock

A Sawtooth Shock has the shape of a triangle similar to the tooth of a saw blade.  Figure 4 shows a typical sawtooth shock performed by DES.  The shock in Figure 4 is approximately 20 G peak acceleration with a duration of 11 milliseconds.  The blue trace was on the base of the fixture while the red and green where the response of the product under test.  Notice the ringing of the product in the red trace after the shock was applied!  Shock programmers for sawtooth shocks are typically deformable lead pellets. 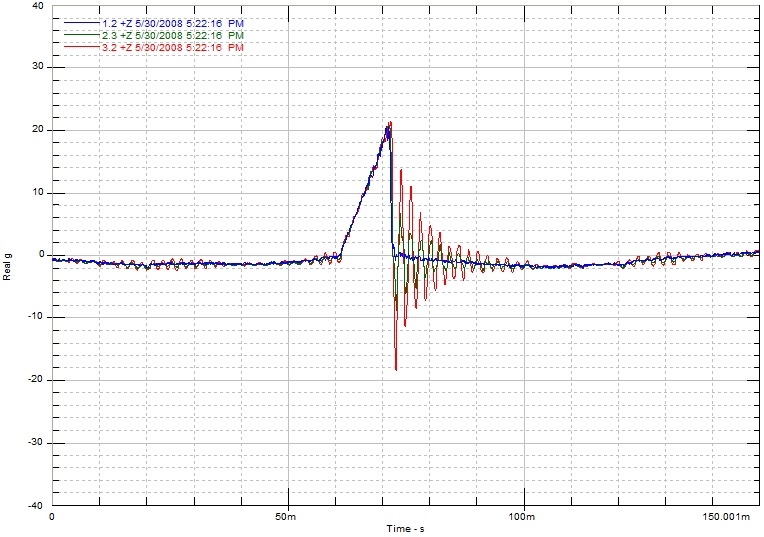 A Trapezoid Shock impulse is also called a Rectangular or Square Shock.  A trapezoid shock has the shape of a rectangle or square.  A typical trapezoid shock performed by DES is shown in Figure 5.  The trapezoid shock in Figure 5 is approximately 50 G peak acceleration with a duration of 10 milliseconds.  Note the sides of trapezoid shocks have some rise and fall time so they are not vertical.  The shock programmers for trapezoid shocks are usually aluminum honeycomb material or gas cylinders.