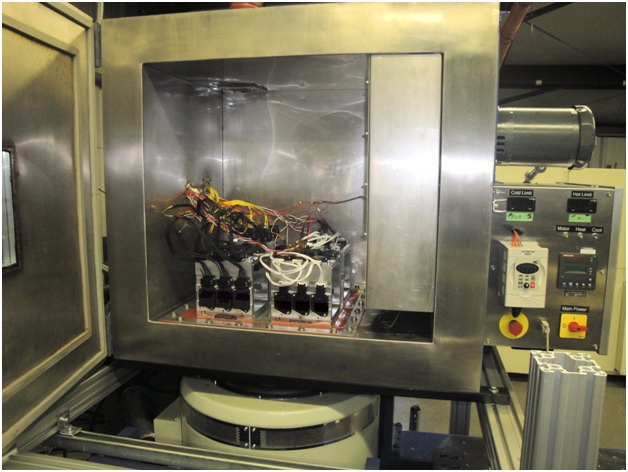 The applicable test specification was GMW 3172, a General Motors Specification for electronic component durability.  The test requirements in GMW 3172 were 13 Grms random vibration from 10 to 2000 Hz.  Simultaneously with the vibration testing, DES’s AGREE Chamber subjected the MAFS’s to temperature cycles between -40 °C and +125 °C.  In addition to the harsh temperature and vibration environment, the sensors were electrically powered and monitored for operation or failure during the test.  These harsh conditions had to be run for at least 44 continuous hours per axis along three different axes.  Sometimes they were run for longer durations.  Many sensors were tested simultaneously which added to the challenge.  Finally, a bench air flow tester was used to perform calibrated air flow measurements after each axis to verify the electrical output of each sensor.

This case study shows the advanced capabilities of DES to complete the most difficult temperature and vibration test projects.