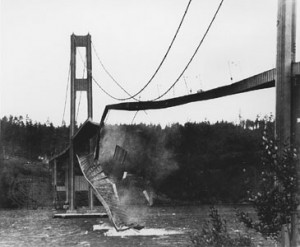 Vibration of a mechanical system can be descried as an oscillatory motion about an equilibrium point. Certain vibrations of mechanical systems can be considered desirable, such as in musical instruments like a tuning fork or guitar.

However, often times vibrations of mechanical systems are undesirable, producing wasted energy, unwanted noise and catastrophic failures. Therefore it is critical during the product design phase that engineers are able to accurately characterize the vibration response of the system in order to ensure a safe and reliable product for their customers. We accomplish this through comprehensive vibration testing services.

There are two main categories of vibration responses engineers are concerned with: free (or natural) vibration, and forced vibration.

Resonance can be fatal to mechanical systems and engineers must avoid it at all costs.  Large amplitudes imply large forces, and large forces cause material and system failure.  For example, consider the well-known Tacoma Narrows Bridge collapse.

The Tacoma Narrows Bridge was a suspension bridge crossing the Tacoma Narrows straight in Pierce County, Washington. On the morning of November 7, 1940, the force of wind gusts acting on the bridge reached a periodic frequency matching that of the natural frequency of the bridge. The result was a wildly unstable resonance response which caused the bridge to swing and twist uncontrollably until the bridge couldn’t support itself anymore and ultimately collapsed. Although the collapse produced no human casualties, it served as an example of the implications of vibrational resonance.

Examples of resonances in mechanical products can be seen in one of our videos.

In order to prevent a catastrophic failure in your product, DES is capable of controllably testing and analyzing the vibrational response of your product with its wealth of experience and knowledge, utilizing our vibration tables and vibration analysis software. Contact us to learn more about our vibration testing services today.