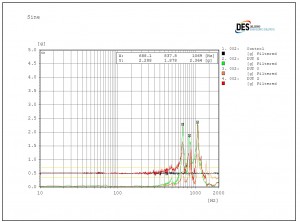 Some random vibration test specifications such as RTCA DO-160 (Environmental Conditions and Test Procedures for Airborne Equipment) require a sinusoidal vibration resonance scan before and after the test along each axis.  Any significant change in the resonance scan results could be sign of damage or product failure.

The most famous failure due to resonance was the catastrophic Tacoma Narrows Bridge collapse as seen in our blog article Vibration Response of Products.  When products are exposed to vibrations near their natural frequencies, fatigue failures from a vibration resonance can occur.  Compressors and motors are examples of equipment that could generate significant vibrations.   Products installed near such equipment should not have natural frequencies near their running speed.

In order to prevent early fatigue failures in your product, DES is capable of testing and analyzing the vibrational response of your product using their wealth of knowledge and vibration analysis software.

One thought on “What is a Vibration Resonance?”