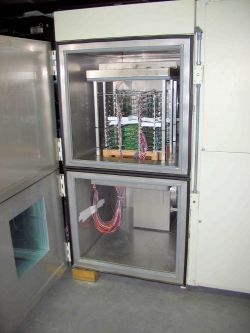 Our customers often ask, What is the Difference Between Thermal Shock and Temperature Cycle Testing?  Both types of tests expose products to cycles between hot and cold temperatures.  Both tests produce stresses caused by thermal expansion and contraction.  In many cases, components expand and contract differently.  This creates cumulative fatigue damage during each cyclic, which could result in a fatigue failure.

Examples of sources where thermal shock may occur are:

Examples of sources where slower thermal cycles may occur are:

Delserro Engineering Solutions, Inc. (DES) has many years of experience performing thermal shock and temperature cycle testing.  We can assist you with setting up a test, choosing the proper test conditions or choosing a test specification.  Please contact us or call 610.253.6637 to find out what DES can do for you!